New Istanbul Hard Fork guide is released by the Ethereum Foundation to share the details about the network upgrade announcement set to happen on December 7th.

Ethereum network’s upcoming Istanbul hard fork has seen many leaks related to the project in the past, now the platform has come out to reveal the complete details of the upcoming hard fork along with the to-do guide, real-time data, and required software.

Hudson Jameson, Community Leader of the Ethereum Foundation confirmed that the hard fork would be released on December 7th, 2019 and all the node operators should upgrade their node by Sunday, December 1st to account for the variable block time. The Ethereum Foundation also released a real-time monitoring tool that can be used by community members to track the status of developers and miners in the run-up to the hard fork.

Along with the to-do list and real-time monitoring tools, they also launched a list of final releases like Aleth, Besu, and Nethermind which would be compatible with the Istanbul upgrade.

The warning for node operators

The official announcement also contained a warning to the node operators regarding updating their Ethereum client before the commencement of the upgrade on December 7th. If the individual forgets to upgrade and uses the old client then their node client would change to the pre-forked chain.

Ethereum is upgrading soon! Click below to learn more about the coming improvements and on preparing for the Istanbul network upgrade.https://blog.ethereum.org/2019/11/20/ethereum-istanbul-upgrade-announcement/ … 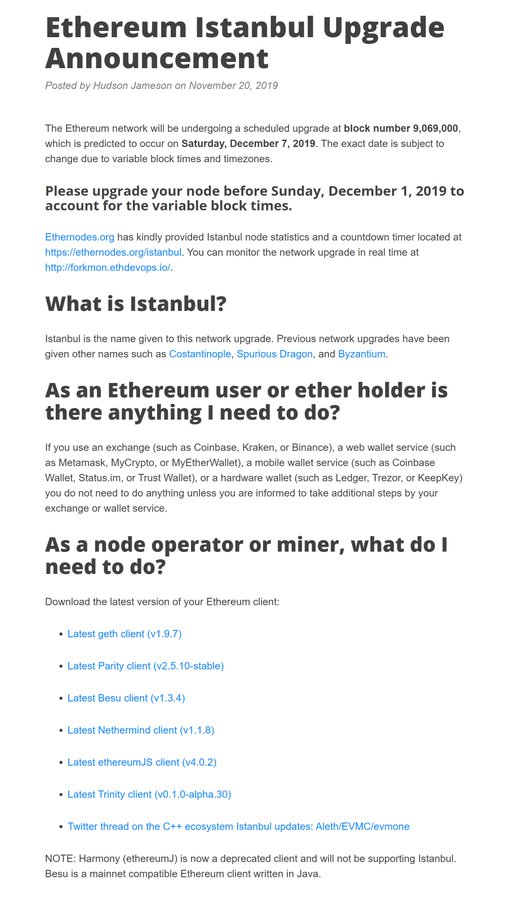 185 people are talking about this
The abandoned chain won’t be compatible with the ethereum network thus, they won’t be able to send transactions to the upgraded network.

Users who are holding their Ether in online wallets, hardware wallets or exchanges, they should only upgrade once their service provider has authorized for it.

The aim of the hard fork

The upcoming Istanbul hard fork would be the 8th hard fork of the network since its inception in 2013. However, this hard fork has been most talked about because it aims to help the Ethereum network become more scalable amid growing concerns of it slowing down due to increased use.

The forked Ethereum network would use different consensus algorithms and sharding to increase efficiency and transaction speed on the platform and also make it more resistant against replay attacks.

The most important change would be the introduction of ProgPOW a new form of mining consensus which would make the network more decentralized, cheaper to use with faster transaction processing.